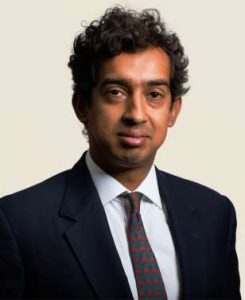 Farhaz was born in Mile End, London, to Bangladeshi parents. He grew up in Brighton where he attended a state comprehensive school and sixth form college. Farhaz went on to study History at university (BA and Masters) before converting to law (GDL), studying for the bar exams (BVC) and completing a pupillage at Outer Temple Chambers.

Farhaz is now a barrister at 3 Verulam Buildings practising in commercial and regulatory law, with a focus on banking, financial services and pensions. His cases typically involve one party suing another for money, or where a regulator accuses someone of misconduct. Often, this arises from a business transaction gone wrong, and may involve allegations of fraud or bad faith. Farhaz enjoys cases with an international dimension. Whilst English law applies (most of the time), the parties are sometimes based abroad. An interesting example involved Farhaz travelling to Washington to defend a Swiss banker from potential allegations of wrongdoing under US law. More recently, Farhaz represented a Bangladeshi soft drinks company in a contract dispute with a sugar trader based in Singapore. The parties had agreed to resolve their differences in London, and Farhaz’s client was pleased to be able to instruct an English barrister who spoke Bengali, and had some understanding of how business in Bangladesh is conducted. In this way, increased diversity at the commercial bar can be an asset, as well as a thing of value in and of itself.

Farhaz supports diversity at the commercial bar. He works closely with the Social Mobility Foundation raising money and working with A-level students from atypical socio-economic backgrounds who might, one day, seek a career at the bar. He also acts pro bono for individuals accused of misconduct in regulatory proceedings through the Financial Services Lawyers Association pro bono scheme. Farhaz took Silk in 2022.